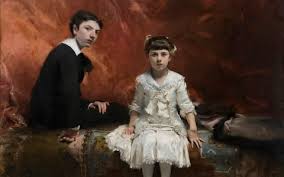 Are ghosts just a figment of our imagination or are they truly there? In The Turn of the Screw by Henry James, readers are asked to either accept them as real or imagined. The novella introduces us to a young governess who is hired to care for two orphan children, Miles and Flora, by their rich uncle. He never visits them in their country home at Bly and expects the Governess to care for them without bothering him. Everything seems to be going well until the Governess sees a male figure named Peter Quint. This man was a former servant at Bly, who slipped on ice after drinking and died. This means that the Governess is either seeing a ghost or hallucinating. She witnesses another ghost who she assumes to be the children’s former governess, Miss. Jessel. The Governess wants to “protect” the children from these ghosts, whom she believes to be evil. She believes that the children see them as well, but do not want her to know. According to her, the ghosts are corrupting the children, but evidence suggests Miles and Flora are victimized by the Governess’ own imagination, causing them to face corruption and even death.

Told through the Governess’ point of view, the readers can question her reliability. In the beginning of the book, she becomes attached to the children instantly. She sees them as innocent beings and believes they can never do anything wrong: “anything so beatific as the radiant image of my little girl, the vision of whose angelic beauty had probably more than anything else to do with the restlessness that, before morning, made me several times rise and wander about my room to take in the whole picture and prospect” (James 7). It would be understandable to think a child is beautiful, but to stay up all night thinking about that child’s beauty is absurd. Not sleeping enough can actually be a cause of hallucinations, which could be a possible explanation of why she “sees” ghosts. Once the Governess believes that they are not as innocent because they are “lying” to her about not seeing the ghosts, she is still obsessed with them, but this time obsessed with saving them from the corrupting influence of the ghosts.

She also tends to assume things without actually knowing what is true. After seeing Peter Quint, the Governess talks to the housekeeper Mrs. Grose of her observation. ‘“He was looking for little Miles.’ A portentous clearness now possessed me… ‘I know, I know, I know!’ My exaltation grew’” (James 25). When she sees the second ghost, she automatically assumes it is Miss. Jessel and believes Flora sees her as well. ‘“Then ask Flora-she’s sure!’ But I had no sooner spoken than I caught myself up. ‘No, for God’s sake don’t! She’ll say she isn’t-she’ll lie’… ‘Flora doesn’t want me to know”’ (30). How is the Governess making up these assumptions when the children never admitted to seeing the ghosts? She uses her imagination throughout much of the novella to create her own reality.

She sees herself as a hero. The Governess wants to “save” the children from the evils of the ghosts. “‘Dear little Miles, dear little Miles, if you knew how I want to help you! It’s only that, it’s nothing but that, and I’d rather die than give you a pain or do you a wrong”’ (62).

This part is ironic because the governess herself ends up hurting the children the most, emotionally and physically. In the article “The Reversal of Value in The Turn of the Screw”, Mark Steensland suggests that the Governess “becomes so confused that she does not even know it is she who is destroying the children. She has become, not their savior, but a kind of antisavior; an Antichrist” (Steensland 463). Religiously, the Governess is the devil herself. She destroys Miles and Flora’s psyche by forcing them to admit they see the ghosts too when they really don’t. In her mind, she thinks she is the only one who can and will save and protect them.

The Governess puts herself in the ghost’s positions. It is almost like she is the ghosts herself, as if she is the evil that has corrupted the children. ‘“It was confusedly present to me that I ought to place myself where he had stood. I did so; I applied my face to the pane and looked, as he had looked, into the room”’ (20). No sane person would place themselves in the exact position where they had seen a ghost. Then, she is put in Miss. Jessel’s exact position: “suddenly collapsing there on the lowest step and then, with a revulsion, recalling that it was exactly where, more than a month before, in the darkness of night and just so bowed with evil things, I had seen the spectre of the most horrible of women” (57). The ghosts are a representation of the evils within the Governess, which she created with her own imagination.

Once the children cannot handle all the stress the Governess has put upon them, they start to break apart. Flora screams: ‘“I don’t know what you mean. I see nobody. I see nothing. I never have. I think you’re cruel. I don’t like you”’ (70). She admits her hate to the Governess because of the pain she has caused her. Flora becomes so sick after this, and has to leave with Mrs. Grose to go see their uncle. Since the Governess has strained upon her so many times that the ghost is there, it is possible that Flora had a mental breakdown. The Governess is then left alone with Miles, and they encounter Peter Quint. While she’s holding Miles, she yells at Peter Quint, saying that he has lost Miles and that he is hers. She wants Miles to confess that he sees what she sees and he says: ‘“Peter Quint-you devil”’ (85). James’ ending to his novella confuses many readers, but it is pretty clear that Miles is calling the Governess the devil. She believes she has won over Peter Quint because Miles “surrendered” to saying his name and this moment is very meaningful to her. ‘“They are in my ears still, his supreme surrender of the name and his tribute to my devotion”’ (85). Miles does not actually see the ghost, but the Governess thinks he does. What she does not realize, is that she has killed Miles by smothering him. She has not won over the evil.

Throughout The Turn of the Screw, evidence suggests that the governess is mentally unstable and Flora and Miles are victimized by her imagination. The ghosts in the novella are a representation of herself. She tries fighting off the evils within her, but they take over and ruin her, as well as the children that she believed she could protect.